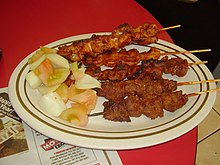 So what defines a fruit from a vegetable and vice versa? While the cause of many a debate, some undoubtedly heated, botanists themselves seem rather nonplussed by the issue. While they concede that any fruit of a tree is probably a fruit while vegetables come from vines and bushes, their primary concern is the taxonomy and genetics of these plants, not their editable qualities. Most botanists will tell you that the vegetable vs. fruit debate is at least in part based on myths about botany, and it is largely the taste and use of a fruit or vegetable that will determine its classification. In other words, there is no hard science to help us answer this question- it is one for the kitchen.

How many of us have heard that tomatoes are actually fruits, and watermelons are actually vegetables? Well, you might as well say in that case that blueberries are actually vegetables and that cucumbers are fruits (cucumber and watermelon are closely related in case you didn’t already know). In fact, tomatoes are, after all, berries. But then again, so are eggplants. Does that make them fruits as well? Squash is rather sweet, isn’t it? And it belongs to the same gourd family that watermelon (and honeydew and cantaloupe) do. So is squash a fruit?

For my part I plead for sensibility. Cooks are not botanists, though we are concerned with how (roughly) one vegetative matter we use in cooking is related to the next. We are very concerned with common names, but almost never taxonomical ones (would anyone care for some Asparagus Officinalis with the braised chicken tonight?). There is a sensibility to balancing fruits and vegetables and while there is a little overlap in their use, generally we know that (I’ll just go ahead and say it) a tomato is a vegetable and watermelon is a fruit.

See also  Why People Think Medications Are A Good Idea

I did have tomato sorbet once though, I should add. It wasn’t bad (or great either), and neither is cubed cucumber unwelcome in a fruit salad. But mostly I’ll stick to using my tomatoes for marinara, salads, and the like, and marinate the cukes.